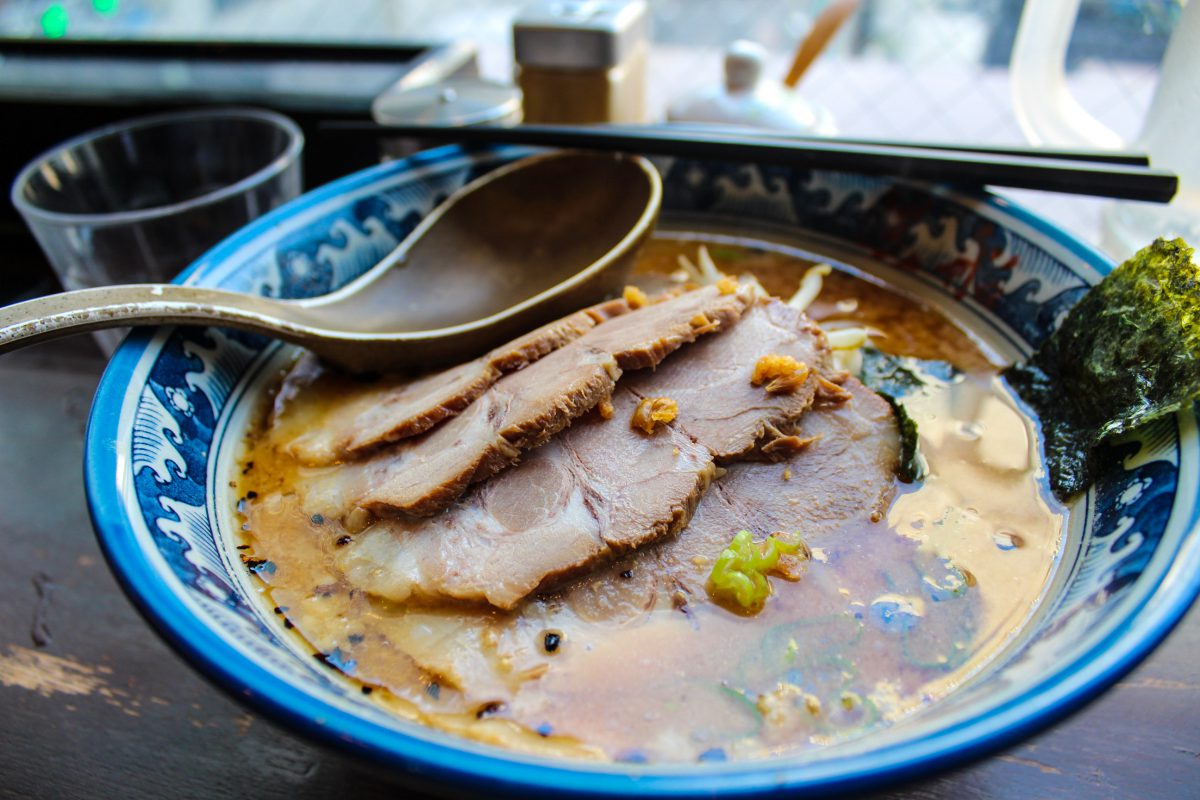 The Akihabara (秋葉原) Electric Town is famous for being the capital for video games, anime, manga, and all things otaku. Akihabara is often where tourists make their first stop in the Japanese capital, whether on a sacred pilgrimage to the holy land of their beloved otaku subculture, or simply for the sights one can only experience there.

Akihabara, however, beyond its countless number of shops, big, and small; beyond the cosmopolitan waves of people roaming down the streets, in search of the various products to satisfy their inner otaku, is also home to an amazing food scene, credit to the local restaurants and cafes. While we at Otashift are guilty of the occasional Mc Donald’s trip while in Akihabara, it is disheartening to see so many tourists bypass local eateries in favor of Western chains. To make your life easier, and help you enjoy some of the amazing food Akihabara has to offer, we’ve tried four restaurants which are strongly recommended by the locals in the Electric town and will be sharing our thoughts.

We had their basic ramen bowl, 鶏王らーめん(鶏白湯), which comes with a whole chicken leg, scallions, black Chinese fungus, and a healthy portion of perfectly chewy noodles, all in a thick, savory chicken based broth. It costs 820 yen. As with most ramen shops, the average price is around 1000 yen. To go with your bowl of ramen, they have a variety of condiments, including a thick chili sauce which ads a bit of heat, while being extremely fragrant, with just the perfect amount of sweetness to it. They offer an all you can eat side made with bean sprouts which I found very addictive.

Overall, it was a very enjoyable meal. The chicken was cooked to perfection, and was juicy and oh so tender. The simplicity in the choice of toppings pairs well with the rest of the dish, and ads the bit of freshness and lightness required to balance out the rich sauce and chicken, as did the extremely addictive bean sprout side dish.The star of the show, however, was the broth. I could have eaten it alone if they had decided to make a dish out of it. The layers of flavors, resulting from the countless hours of roasting, simmering, reducing, and whatever obscure alchemy must’ve gone through processing the bones, meats, vegetables, and spices, were well worth the hassle. I definitely will be going again when I find myself in Akihabara Electric Town.

Most of you have probably heard of, if not already eaten tonkatsu (豚カツ, 豚 = ton, pork; カツ = katsu, shortened form of cutlet), the succulent Japanese dish made with panko-breaded, deep fried pork cutlet, often served with a bowl of rice and massive amounts of shredded cabbage. It is a very simple concept, but when done well, is probably one of my favorite things on Earth, somewhere between sleep and natto. This concept can be applied to other meats, in the case of chicken, it becomes chicken katsu, which can be equally delicious. This restaurant applies the katsu concept to wagyu beef loins, with extraordinary results.

Gyukatsu Ichi Ni San, 牛かつ壱弐参, is locaed 4 minutes away from the Denkigai exit of the Akihabara exit. Alternatively you can get there from the Suehirocho Station. It is open from 11 am to 9 pm on weekdays and from 10 am to 9 pm on weekends and holidays. Diners can choose between a set meal with 130 g of meat or one with 260 g. Each can be combined with grated yam (とろろ, “tororo” in Japanese), which I highly recommend. Along with the katsu, the set meal comes with a bowl of rice, a portion of potato salad, the ever present massive amount of shredded cabbage, pickled vegetables, a couple sauces (soy and garlic), as well as wasabi to mix with the soy sauce, and a small bowl of grated yam if chosen. The “rice” is not simple white rice, but rolled barley, which has becoming popular as a rice substitute in recent years.

The staff was extremely nice as well. They asked me if I had ever eaten there and after my negative response explained how to best enjoy the meal. Upon their recommendation, I mixed some soy sauce into the bowl of yam, and poured it over my rice. I then mixed a liberal amount wasabi into the soy sauce meant to dip the katsu in, and turned my attention towards the meat.

The katsu is cooked to a uniform rare doneness and is meant to be cooked to the preferred doneness by the costumer using the individual hot plate on the table. The quality of the meat, at that price is almost unbelievable. It had the perfect texture, fat content, and tenderness, which married to the crisp, crunshiness of the breading makes it the perfect combination of tastes and textures. Don’t hesitate to add more wasabi than usual to the soy sauce, as the fat from the meat will counterbalance the heat of the wasabi.

To my surprise, the grated yam and rice was really good. I was initially hesitant because the slimy texture reminded me a little of natto, however it turned out really tasty and refreshing. The side dishes were also very good and worked well to add lightness, freshness, and acidity to the dish, to which the katsu and soy sauce already add richness and umami. As far as I’m concerned, this place is also a must go.

The second ramen shop in Akihabara on the list has a more traditional approach to ramen than the aforementioned one. It is a lot closer to what comes to mind when Tokyo style ramen is mentioned, a light, soy flavored broth with the typical sliced pork topping.

In Tanaka Soba, 中華そば専門 田中そば店 秋葉原店, which has been recommended to us as “the best ramen restaurant in Akihabara”, as with most ramen shops, you have a automated machine with various choices, and options to add toppings. As always, we chose the basic option (中華そば) which costs 750 and headed into the shop. The average cost here is less than a thousand yen. As this is quite a popular place, you might have to wait in line for a bit, but luckily, we did not have to.

Quite unlike the previous ramen restaurant, this one had a very light, subtle broth, which was delicious in its own way. The noodles were topped with bamboo shoots, scallions and thinly sliced chashu pork, no nonsense. Of course, more can be added based on preference. But that simple set of toppings were enough to make it one of the best bowls of ramen I’ve ever had. It is perfected simplicity, all the ingredients, including the broth were simple, yet done to perfection. It’s too early for me to say whether it is indeed “the best ramen restaurant in Akihabara”, if such a thing even exists, but it surely is in contention.

Once you’ve finished your noodles, if you want the full authentic Japanese ramen experience, ask for kaedama (替え玉). Kaedama is in simple terms an extra serving of noodles to add to the remaining soup so it doesn’t get too lonely. At Tanaka Soba, kaedama costs 130 yen. Typically, Japanese patrons will add extra spice with the kaedama to make the second serving stand out from the first one.

If you’re not in Akihabara but still want to try Tanaka Soba, don’t worry. Besides the Akihabara location, there are five other Tanaka Soba restaurants within Tokyo. In Adachi, Shinbashi, Akasaka, Asakusa, and in Kudankita. Their websitelinked is in Japanese except for the main sections, but you might be able to decipher information from it.

For those of us who’ve grown up watching anime and reading manga, especially those of the slice of life genre, no dish is more recognizable than omurice. The homey, simple dish consisting of an omelette wrapped around fried rice. This simple dish, as simple as it can be, can also raised to the next level through by those with technical training.

This little restaurant Tamagoken Akihabara, 神田たまごけん 秋葉原店, is hidden in one of the side streets of Akihabara and took us a couple wrong turns to find. It’s near the Family mart, by the way. At the entrance, is the omnipresent automated machine, with the various options, ranging from simple, to almost gourmet-like. We both had variants of their recommended dish, one with a tomato sauce on one side, a hashed beef sauce on the other, and cheese. I chose one without the tomato sauce, as I glutinously wanted more of the hashed beef sauce on my plate.

Watching them work was quite the spectacle. In the restaurant business, it is often said that an omelette is used to test young chefs applying for a job, because it is in reality, despite what people think, a perfectly cooked omelette requires perfect control and technical ability. I have a feeling they would have passed with flying colors; The omelette was cooked to perfection. It had the butteriness, the slightly runny consistency, and fine curds to be expected of a chef made omelette.

Together, the omelette, the rice, and the sauce, were sublime. The sauce had a beef demi-glace base and worked well with the omelette and the fluffy white rice, to make a pretty rich dish. I however found the dish slightly under-seasoned, but salt a better were made available for customers to alter the dish to their preference. To balance the richness of the dish, a container of all you can eat, lightly pickled vegetables is placed on the counter, providing the missing acidity in the dish and each oder comes with a light onion soup. For those of you in Akihabara Electric Town and wanting to try omurice, I would recommend you check this place out.

There are five other locations within Tokyo, each with their own different opening hours. Make sure to check out their English website.

A FEW THINGS TO KNOW BEFORE GOING TO RESTAURANTS IN AKIHABARA

The Akihabara food scene as a whole is known to follow a specific trend as to cater to the assumed daily guest. Because of its reputation as a haven for geeks of all things. And because in Japan men of the demographic used to be much more visible in the Akihabara Electric Town, a large amount of restaurants advertise their food as “manly”. This usually means portions are larger and fattier than normal. This is not to say ALL restaurants follow that ethos, but if you’re ever looking for the occasional unhealthy cheat-day dish, Akihabara is where it’s at.

Although Japan is slowly getting up to date with card use, they are not used everywhere just yet. Be prepared to pay with cash at the majority of restaurants while in Akihabara. Finally, these restaurants are really popular with the locals. This means depending on the time you go, you might have to wait a bit. In most cases, it is not too long, and worth it. We hope you check out the restaurants and enjoy them as much as we did!